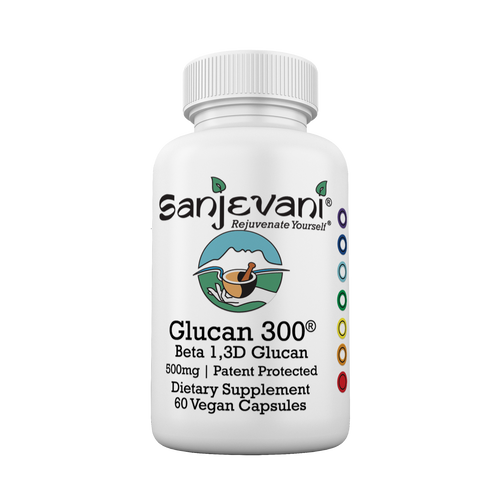 Sanjevani Glucan 300 Beta-1, 3D Glucan boosts the immune system to provide support and balance.* It is unlike other immune supplements that simply stimulate or alter the immune response in unnatural ways. Over 50 years of research from prestigious universities around the world have documented the benefits of Beta-1,3D Glucan.†

Sanjevani Glucan 300 offers a Beta glucan with a minimum of 83% Beta-1,3D Glucan content, one of the highest on the market without a prescription, with no harmful contaminants.

Sanjevani Glucan 300 has been shown in vivo studies to be more effective in supporting the immune system (i.e. Phagocytosis of Neutrophils and Interleukin-2) in side-by-side comparison with 60+ other beta glucan products from mushrooms and other sources. (see comparison chart in thumbnail images).

Sanjevani Glucan 300 has been shown to be:

What are Beta Glucans?

Beta Glucans are polysaccharides found highest in concentration in mushroom, oats and barley. Sanjevani Glucan 300 derives the beta glucan from growing it on a saccharomyces cerevisiae culture which provides the highest concentration of beta glucan at minimum 84%, versus 20% that is derived from mushrooms.

Beta Glucans work by activating immune cells known as macrophages. These macrophages trap and consume foreign substances that do not belong in the body. They "trigger" a whole cascade of immune functionality, allowing your body to produce the most complete, effective, and appropriate immune system response achievable.

Think of your immune system as a cavalry of "generals". They are the brains behind an army of immune system “soldiers”; whose goal is to ward off any foreign invaders. Beta Glucan is the catalyst in making your Immune System generals smarter, while increasing the strength of your immunocyte army. Arming yourself with this kind of defense system, is like giving your immune system the special training it needs, to be all it can be.

For general immune support: Take 2 capsules daily on an empty stomach for 45 minutes before eating or as directed by a healthcare professional. For additional support: Take one capsule for every 50 lbs of weight (i.e., if you weigh 175 lbs, then you should take 4 capsules on an empty stomach). For those who have difficulty swallowing capsules, try our Beta-Kids Gummies which provides the same Glucan 300 ingredients in an all natural gummy.

This product does not contain mushrooms and is safe for those with mushroom allergies. Also, studies show that beta glucan works better if taken with Vitamin D3 to enhance immune support.

If you are pregnant or nursing, have a medical condition, or are taking medication, consult your healthcare professional before using this or any supplement. Discontinue use if allergic reaction occurs.

†*These statements have not been evaluated by the Food and Drug Administration. This product is not intended to diagnose, treat, cure, or prevent any disease.