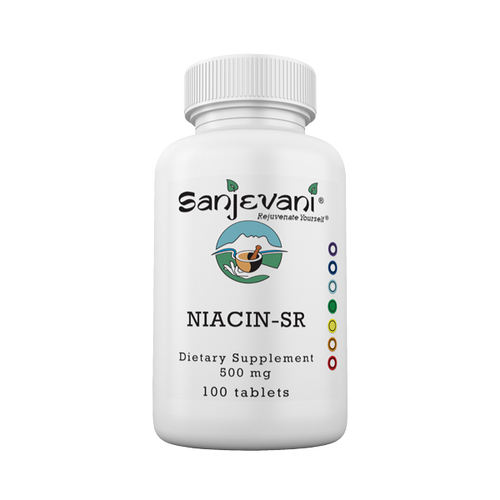 Suggested Use: 1 to 4 tablets daily with food or as directed by a healthcare practitioner. Start with one tablet in the evening with food as tolerated and increase slowly twice daily, if need or directed by your healthcare provider.

Niacin, also known as vitamin B3, is a water-soluble vitamin necessary for many aspects of health, growth, and reproduction.  Nuts, legumes and enriched breads and cereals supply niacin.†

Niacin assists functioning of the digestive system, skin, and nerves and is important for the conversion of food to energy. Niacin also occurs in a form called niacinamide. This form can also be beneficial in ensuring adequate intake of niacin when used in supplements.

Note: "Flush-Free" niacin, in the form of niacinamide provided in other niacin products does NOT support lipid metabolism.

Sanjevani Niacin-SR provides only pure niacin which has significant benefits on maintaining normal metabolism of high-density cholesterol (HDL or "good cholesterol" and triglycerides.†

Sanjevani Niacin-SR is the sustained release (SR) form of niacin over several hours helps avoid the uncomfortable flushing action so that its full benefits on cholesterol metabolism can be obtained.  Large amounts of niacin can cause skin flushing and a warm sensation, especially of the face, neck, and ears. Occasionally, flushing may also occur with sustained release (SR) niacin preparations (less than 10%). Taking niacin with food may reduce this effect. Each Sanjevani Niacin-SR 500 mg tablet is scored to allow for easier dosage adjustment as needed.†