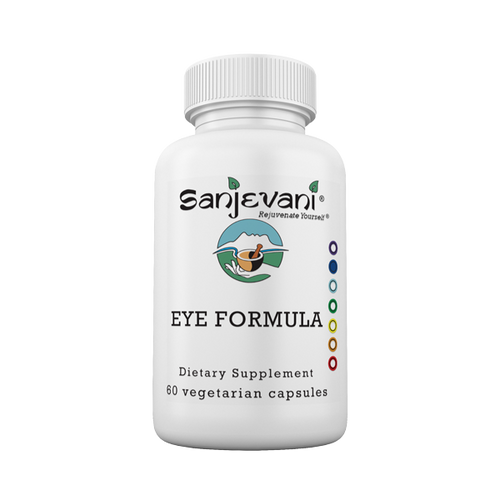 Suggested Use: 2 capsules daily in the morning with food as directed by a healthcare practitioner.

Sanjevani Eye Formula supplies a combination of nutrients with antioxidant activity that help support and protect ocular health and help reduce eye fatigue. Not only is this formula helpful for those who are at risk or have eye conditions that need improvement of overall eye health, but it helps those who obtain eye fatigue from overuse of computer and smart phones. Eye tissues are very susceptible to damage as a result of daily exposure to light radiation and oxygen. This type of oxidative damage can increase the chances of developing ocular disorders such as cataract and age-related macular degeneration. Free radicals generated during oxidative stress appear to damage lens proteins and can result in impaired visual function. The lens, retina, and other eye tissues rely on strong antioxidant defense systems to protect and maintain visual health and function.†

Vitamin C: This well-known antioxidant vitamin helps protect tissues in several ways: it neutralizes damaging free radicals generated by ultraviolet light, cigarette smoke and other airborne pollutants; it appears to protect against oxidation and subsequent clouding of lens proteins; and it helps maintain integrity of connective tissues in the eyes.†

Vitamin E: This antioxidant vitamin helps protect cellular membranes and tissues from oxidative damage throughout the body. Vitamin E is normally present in high concentrations in eye tissues, where it plays a crucial protective role from the constant exposure to free radicals that are a threat to these delicate tissues.†

Lutein and Zeaxanthin: This formula provides the beneficial and important "elemental" form of these two carotenoids.  This is the actual part of these compounds that are absorbed.  Many other eye formulas provide higher totatl amounts of these ingredients, but deliver lower overall absorbed amounts.  Therefore, Sanjevani Eye Formula provides a high potency and better absorbed forms of lutein and zeaxanthin.  These two carotenoids are present in a variety of fruits and vegetables, such as dark green, leafy vegetables, oranges, and corn. Both lutein and zeaxanthin are highly concentrated within the macula, the center portion of the retina, where they filter out harmful blue light that can damage the eyes. They also exert powerful antioxidant actions that can help protect the lens from oxidative damage and subsequent clouding.†

N-Acetyl-L-Cysteine (NAC): This amino acid compound has the ability to increase levels of glutathione in the body, thus helping to reduce oxidative stress. Glutathione is a crucial antioxidant that deactivates many pro-oxidants. NAC also possesses powerful antioxidant properties of its own.†

L-Glutathione: An indispensible component of the body’s antioxidant defenses, glutathione is highly concentrated in the lens of the eye, where its antioxidant properties help maintain clarity of the lens. Glutathione levels in the lens typically decline with age, increasing the susceptibility to oxidative damage.†

Alpha-Lipoic Acid: The powerful antioxidant actions of this compound offer an unusually wide range of protective benefits. Alpha-lipoic acid helps protect the eyes by deactivating free radicals and also helps build up the body’s antioxidant defenses by recycling other antioxidants, including glutathione and vitamins C and E.†  Sanjevani Eye Formula's alpha-lipoic acid is sourced from Europe and not from China.

Taurine: This amino acid is found in significant amounts in both the retina and lens where it acts as an antioxidant to protect the eye from oxidative damage by scavenging free radicals. Taurine may also protect lens proteins from glycation, regulate osmotic pressure, and help stabilize ocular membranes.†

Bilberry: As a rich source of potent blue colored flavonoid antioxidants called anthocyanosides.  Sanjevani Eye Formula provides a potent standardized extract to minimum 25% anthocyanosides.   Bilberry has proven to be an important protector of eye health. Anthocyanosides are especially helpful in protecting against oxidative damage in the sensitive capillaries of the eye. They help protect the collagen matrix of eye tissues and support capillary stability and blood flow, effects that are particularly important to maintaining ocular health and function.

Red Grape Extract: As a concentrated source of the beneficial flavonoids proanthocyanidins and resveratrol, red grape extract protects against oxidative damage, supports the integrity of blood vessels throughout the body, and enhances collagen health.†

Sanjevani Eye Formula can be taken daily by anyone wishing to supplement their dietary intake with a broad spectrum of protective nutrients to support ocular function.